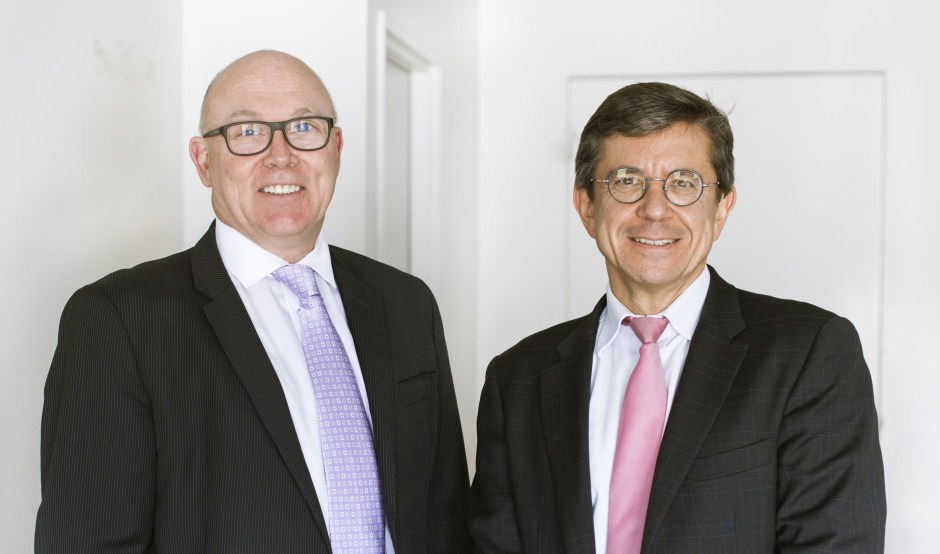 Craig McNally on the left and Pascal Roché on the right

Craig McNally – Chairman of the Board of Ramsay Santé

Ramsay Santé is today a leader in the provision of integrated care in Continental Europe. The group cares for 7 million patients each year, through 250 hospitals and clinics in all disciplines and 130 primary care centres.

With our partner Crédit Agricole Assurances, our commitment is a long-term one, especially as we are convinced of the quality and solidity of the French and Scandinavian healthcare systems. Every year, we invest more than €250 million to ensure that the quality of patient care and the organisation of personalised pathways are constantly improved.

This year has of course been exceptional because of the Covid epidemic, which has disrupted the daily life of our facilities as well as the projects in progress. I would like to salute the remarkable adaptability of our teams and their incredible dedication.

This year was marked above all by the Covid epidemic and the exceptional mobilisation of our teams to care for patients suffering from this virus in all the group's countries, particularly in France, Sweden and Italy. This teamwork, combined with the strength of the group, enabled us to take care of more than 10,000 patients in intensive care, medicine and follow-up care and rehabilitation (FCR), not counting emergency room visits. This has been made possible by full coordination with public and private hospitals, with one objective shared by all: to do our job by finding a solution for every patient affected by this disease.

As a leading player in the private sector, we are very proud to have more than just played our role with the public authorities in all the countries in which we operate.

Beyond this unprecedented health crisis, we are continuing to transform our group to better prepare it for the future of a health sector that is itself undergoing rapid change thanks to advances in medicine and technology, artificial intelligence, and the new expectations of patients and populations... This year has therefore also been one of increasing digitalisation of our activities, the ongoing modernisation of our operating theatres and imaging capacities, the rise in importance of coordinated care pathways, new projects such as the experimentation in France of the Scandinavian proximity care concept...not forgetting prevention, which we wish to integrate more and more into our activities in the interests of our patients and our care systems. The Ramsay Santé Foundation is innovating in this field by creating with the Brest Faculty of Medicine the first "prevention" University Diploma dedicated to carers.

General management is exercised by a single Chief Executive Officer.

The Company refers to the recommendations of the AFEP-MEDEF corporate governance code for listed companies, as in its updated version in January 2020.

The rules governing the composition and operation of the corporate governance bodies are set out in Article 14 of the bylaws available on the Company's website. The rules governing the operation and powers of the Board and the committees it has set up are set out in internal regulations, the latest version of which was adopted by the Board of Directors on June 2, 2021.

Composition and operation of the Boad of Directors and Advisory Committees

1 - Composition of the Board of Directors

As of October 29, 2021, the Company's Board of Directors is composed of the following ten members:

The detailed composition of the Board of Directors is presented in paragraph 5.1.1 of the universal registration document.

The Company's bylaws were amended by the Shareholders' Meeting of December 13, 2016 to allow for the appointment of a director representing employees pursuant to the provisions of Article L.225-27-1 of the French Commercial Code as amended by the Act of August 17, 2015 on social dialogue and employment.

The Shareholders' Meeting of 11 December 2020 decided on a new amendment to the articles of association in order to allow the appointment of a second director representing the employees, as provided for in the Pacte law (law n°2019-486 of 22 May 2019).

The directors representing the employees have the same status, powers and responsibilities as the other directors.

The Company is a controlled company within the meaning of Article L.233-3 of the French Commercial Code. Its shareholders include two major shareholders, Ramsay Health Care (UK) Limited and Predica, which hold 52.79% and 39.82% of its share capital, respectively.

Ramsay Health Care (UK) Limited and Predica are bound by a shareholders' agreement entered into on September 30, 2014 and amended by an amendment dated December 12, 2016. The main provisions of this shareholders' agreement were the subject of two notices published by the AMF on October 8, 2014 under number D&I 214C2099 and on December 21, 2016 under number D&I 216C2885 and are described in paragraph 6.2.4 of the universal registration document.

The composition of the Board of Directors complies with the principle of balanced representation of men and women in accordance with the provisions of Article L.225-18-1 of the French Commercial Code resulting from the Act of January 27, 2011 on the balanced representation of women and men on the Boards of Directors and Supervisory Boards and on professional equality, which provides that the proportion of directors of each sex may not be less than 40% at the end of the first ordinary shareholders' meeting following January 1, 2017.

The Board of Directors has four women out of eight members, i.e. a 50% feminisation rate, excluding employee representatives who are not counted to establish this percentage.

It should be noted that two of the three committees set up by the Board of Directors, namely the Audit Committee and the Appointments and Remuneration Committee, are chaired by a woman.

In accordance with the provisions of the bylaws and recommendations in this area, the Board of Directors is assisted in its tasks by three advisory committees: the Audit Committee, the Appointments and Compensation Committee, and the Risk Committee. Their role is advisory.

The Audit Committee has four members, all of whom are financially literate, of which one member independent:

The Committee is chaired by an independent member in accordance with the recommendations of the AFEP-MEDEF Code:

The Committee is chaired by a member of the Board with the requisite experience in risk management and is made up as follows :

The position of Chief Executive Officer of the company is held by Mr. Pascal Roché, initially appointed on June 30, 2011. Mr. Pascal Roché was reappointed by the Board of Directors at the end of the Annual Shareholders' Meeting of December 10, 2019 for a three-year term.

In order to implement its strategic plan, Ramsay Santé balances its structure between each country’s Business departments, dedicated to the operational implementation of medical projects and the group’s development, and the cross-division functional departments.